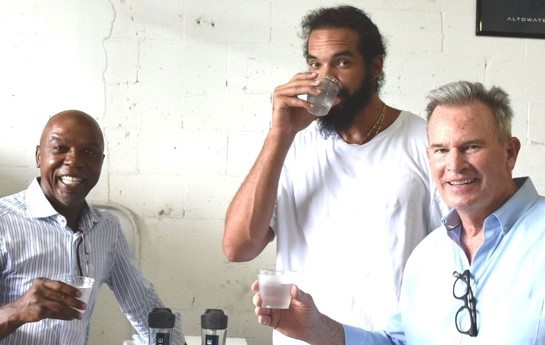 PORT ST. LUCIE, Fla., Oct. 8, 2021 /PRNewswire/ — Altitude International Holdings, Inc. (OTCQB: “ALTD”) has announced the shipment of four Atmospheric Water Generators purchased by the Noah’s Arc Foundation to Cameroon. The shipment marks the beginning of ALTD’s efforts to put an end to one of the longest, deadliest crises the world has known.

It is estimated that 850,000 Africans die every year from diseases that are contracted directly from their drinking water, with babies under two being the most vulnerable. According to the Conversation in an article dated June 9, 2016, “In Africa, more than 315,000 children die every year from diarrheal diseases caused by unsafe water.” Despite these staggering numbers, no significant progress has been made towards ending this crisis or even in lessening its effects.

ALTD’s Water to Africa initiative has been developed to immediately bring relief to the areas of Africa that need it the most. ALTD hopes to quickly demonstrate the efficacy of its systems to Governments across Africa as well as to major world organizations, leading to the establishment of “Altitude Water Hubs” across the continent. Altitude Water machines are currently being utilized by all five branches of the US Military with new orders growing exponentially

Water to Africa is a collaboration between Altitude Water (a wholly owned subsidiary of ALTD), legendary sports figures Joakim and Yannick Noah and their Noah’s Arc Foundation, and Russkap Holdings, ALTD’s strategic partner for worldwide AWG distribution. This critical humanitarian project was created and is being led by Adrian Walton, ALTD’s Director of Community Outreach.

Joakim Noah stated, “My father and I are so thankful that we will have a chance to immediately impact his homeland of Cameroon while showing the world that this is a fight we can win. The fact that the US Department of Defense keeps increasing its orders for our machines says a ton about what our technology is capable of doing. I am now working hand-in-hand with NBA Africa and see great partnership possibilities emerging from the NBA’s mission in Africa and what ALTD is trying to accomplish.”

Ed Russo, CEO of Russkap Holdings said, “There is no better cause for the world to rally behind than what we are trying to accomplish in Africa. Our partners at ALTD continue to lead the way with their technological advancements that have made our machines so popular and effective, wherever they are deployed. I believe our proven ability to create safe drinking water while virtually eliminating logistical problems will be a game changer in all the areas that suffer from contaminated water supplies.”

ALTD CEO Greg Breunich concluded, “Our groundbreaking ozone air-to-water systems get pure water to where there is no water and can hopefully lead a worldwide movement toward putting an end to this nightmare once and for all. We realize our technologies could never solve this crisis alone, but by raising awareness, supplying our machines, and rallying worldwide support, we believe we can start saving lives immediately.”

This press release contains “forward-looking statements,” defined in United States Private Securities Litigation Reform Act of 1995, involving risks and uncertainties.  There’s no assurance such statements will prove to be accurate. Actual results and future events could differ materially from management’s current expectations.  Economic, competitive, governmental, technological, and factors identified in company’s previous filings with Securities and Exchange Commission may cause actual results or events to differ materially from those described in forward-looking statements in this release.  Company undertakes no obligation to publicly update or revise any forward-looking statements, whether resulting from new information, future events, or otherwise.